Blog
You are here: Home / Blog / News / The Story Behind Chris and Stacey’s Everesting Attempt!

On the weekend of the 13th of June, most of us would have driven past Stacey (an IntoYou client, and sometimes trainer), Chris (Clare’s husband), and their two friends Meg and Matt, doing laps of Rose Ave and Grevillea St. They performed this circuit for over 23 hours, 87 times, and we thought you may be wondering why!

Firstly, everyone is unanimous that it was Stacey’s fault. Stacey has been to Nepal twice, including last December for her honeymoon. She has a connection to the country, and had only been there 4mths before the earthquake hit. When this devastating event happened, Stacey and her husband donated, but they felt like it wasn’t enough. They knew how badly the earthquake would have devastated Nepal because the people there have nothing.

Stacey’s husband Kynan came up with the idea of “Everesting”, a cycling-community challenge that existed before Nepal’s earthquake. You can read more about it here: Everesting Rules . They started organising immediately, which primarily meant searching for the right hill to climb. After exploring West Head and Akuna Bay, they eventually settled on Rose Ave and Grevillea St, because they had access to a toilet, food, street lights, and people.

They also did their research to work out the best charity to fundraise for. Oxfam has a Headquarters in Kathmandu already, so they have been on the ground since the earthquake, and are a reputable company, plus it was easy to get online to create their own fundraiser (and to donate!).

Their training involved lots of hills! Stacey was training 3 x a week on a wind-trainer with long-interval hill sessions, plus one hill session outside, a long session on the weekend with the team, and one session at IntoYou to keep her knee strong enough to do the distance (she has an old injury, and her knee is still her weakest bit). 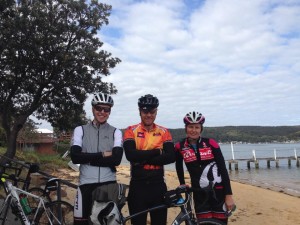 A training run to Terrigal, getting the ferry home again.

They started at 6am on the 13th June, and knocked over the first 20 laps (of 87) quickly. At 10am they were excited about a 10pm finish, 4hrs faster than they had expected. They were also fast because none of the support crew had arrived, they were fresh, and they were eating on their bike (not taking breaks).

However, things went downhill from here (excuse the pun!). At 4pm, they were only half way, and their finishing time looked more like 3am. Their support crew had been on site for hours, and included Stacey’s parents and their partners, Matt’s girlfriend, and Stacey’s husband. Chris’s wife was at home with their kids. Hoards of friends, family, and well wishers also arrived at varied intervals, bringing food (hot chips), drinks, donations, and clothing. Despite the support, it was getting more difficult to eat, their legs were seizing, and other limbs were cramping. Stacey was the first to experience doubts about finishing, after 10hrs on the bike, the end looked a long way off. Some of her closest friends arrived right at this moment, and the normally resilient Stacey crumbled for a moment in her friends’ arms. Her self doubt was short-lived, and she was back on her bike with the rest of the crew within minutes. 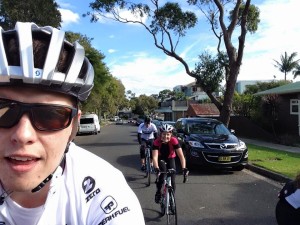 Early on, while they’re still smiling!

At about 7pm the entire team was breaking down and they called a dinner break. They stumbled into IntoYou in various states of disrepair, and ate their dinners whilst sitting on the Power Plates. They credit the powerplate with reviving them long enough to manage to get back on their bikes. There was a steady flow of friends, family, and well wishers who rode with them all through the night, which is lucky as they report that much of it remains a painful blur. About 10pm Meg hit the wall, and got off her bike. She was a couple of laps ahead, and had her breakdown while everyone else continued riding. She pulled herself together to join them on the same lap as she got off, and they managed to finish together.

Matt got slow, hit back was cramping, and he stopped talking. However he also never complained, or stopped. Chris stopped functioning, except for ensuring one pedal came after the other. He cannot remember any of the messages he received, or anyone he spoke to, or how he got home. By now Stacey had plugged into some music and was riding well.

Kynan, Stacey’s husband, noticed that everyone had their moment at different times in different ways. At 3am, some more friends arrived from Baulkham Hills, and happily chatted away with the crew for the next couple of hours. None of our team appreciated this at the time (you can imagine how exhausted they were after 20hrs on the bike), but these fresh-faced people would have certainly kept the team safer than if they were riding alone, as they were all in a fog of pain and exhaustion. Matt even reports experiencing a micro-sleep. 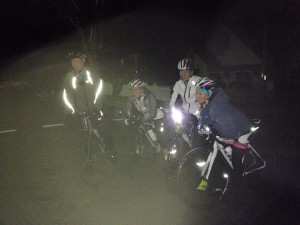 They finished at 5.15am the following morning, 14th June, and with a perfunctory nod, they climbed into their cars and went their separate ways. Chris needed guidance into his own house and bed, and has had pins and needles in his right hand every since. Stacey has had bronchitis, and her right big toe is still numb, a product of being compressed in mountain bike shoes for 23hrs.. Meg ended up at the doctor with blood in her urine, diagnosed as Rhabdomyolysis – a serious syndrome caused by direct or indirect muscle injury, where the muscle dies and breaks down, entering the blood stream and slowly poisoning her. Matt bounced back a few days afterwards, with just a bit of muscle soreness.

It was the hardest thing any of them have ever done, and still doesn’t compare to the hardships of the Nepali people right now. Their momentous effort has been inspiring, reflected in their successful fundraising of over $10,000. Their campaign closes on Friday, so if you haven’t already donated, you can still contribute here: Stacey’s Everesting Attempt . Stacey and Meg were the 36th women to have ever completed the challenge. 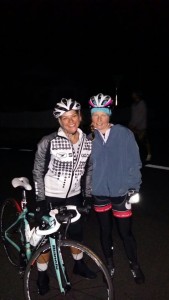 Stacey and Meg during the night.

The results for the girls

Chris maintains that Stacey can’t ask anything of him ever again…. but i think that Nepal will benefit greatly from the sacrifice that these four people have made! 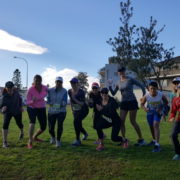 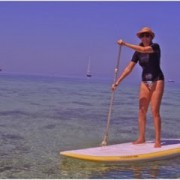 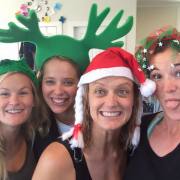 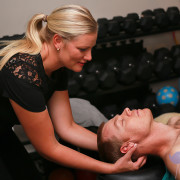 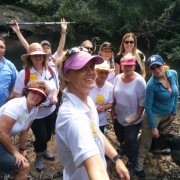 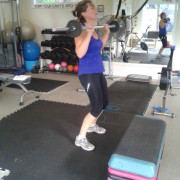 Down & Dirty Power Plus! 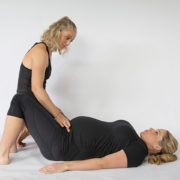 Screening the Pregnant Client Vs the Post Natal
0 replies

An Introduction to Helen!