So where i left you last time, we were covered in blisters, had varying degrees of aches and pains, and had 2 days of hiking to go. Our 4th Day of hiking was “just” 18km, and we were running out of cash. We also realise about now that we cannot just “jump in an Uber” when we get tired… there aren’t any. Nor is there WI-FI, restaurants, supermarkets, or corner stores. Of particular concern to us, there was also no ATMs from which we could get cash to pay the odd person who took money around here! We are in National Park, surrounded by sheep and cows, and IF we get to civilization, the only thing you can expect is a Pub. Thankfully all the pubs have EFTPOS.

But we are still feeling lucky.

Like the time Maddy and I cut through a cow paddock. “It’s a short cut” we say. “it’s great we can just hop over the fence so easily”! So Lucky! And Maddy grabs hold of the wire and it takes her a second to realise that it’s an electric fence…. Or the multiple times we had to squat and do a “bush wee” in the wide open fields, and no-one popped up while we were down there! That’s luckier than you think because although it wasn’t crowded, it also wasn’t often that we couldn’t see at least another 5 people! I found a great bush-wee spot, behind a stone fence with enough time to go before the next hikers were up on us, only to find some stinging nettle with my dairy-air! We have aloe vera gel which works a treat on the sting but didn’t do anything for my embarrassment or the fact that i was standing up with my pants down… 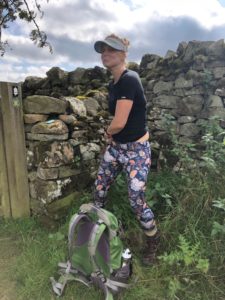 This section of Wall on day 4 was beautiful; higher, and in better condition than we have seen it before. We had a “moment” when we followed it to the top of a ridge, and it literally stopped in mid-air! We had to back track and go around the drop, where we discovered that they had destroyed the wall in the 1900’s for a quarry! It’s now quite a pleasant little pool, rimmed by some familiar stones.

About 5hrs in to Day 4 we popped out of the National Park momentarily to be astonished by the presence of a Tourist Information Centre in the middle of nowhere! With coffee and lunch and flushing toilets, but no WI-FI… but hey, we were still happy! We made use of all these facilities, and were equally astonished to be served by the same lady who served us at our accommodation last night… She’s not a twin apparently, she just “get’s around”. And while we are on the subject of the faux pas… I told the driver of our community taxi yesterday that he’ll “get lucky” when we are in the car! And the 18yr old barman to “stick it in” when he took my credit card. All things i am monumentally proud of… not! 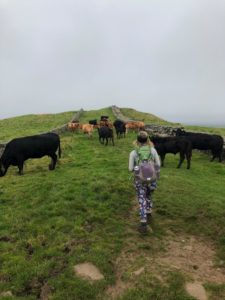 The thing we noticed today was how we have literally walked out of a city, in to suburbia, then in to the wilderness along the wall. It’s been interesting to watch the landscape change! We have also noticed that although people drive on the left hand side in the UK, they walk on the right. This happened in London and the whole way along the wall to date, although it’s not so noticeable right now, here in Edinburgh.

But back to day 4… we started the day in fog. Completely on our own we took hundreds of photos in the misty moodiness – and didn’t start to really hike for almost 2hrs! Although there were fewer gates to open and shut, every single one of them was an IQ test for Maddy. Every gate had a different latch that we had to work out, every fence a different system for climbing over! It was primarily Maddy’s job to to negotiate these, as she defied gravity and strode on ahead, me hobbling after her on my stumps. It was amusing to see her pause at each gate to see which mechanism this one had, and still get caught out by the same ones on the next field! Occasionally Maddy got bit by the “gate snake”, when the gate had a particularly strong swing return! 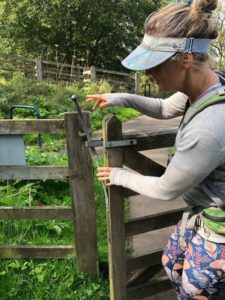 It was not long after one of these “gate-snake-bites” that we were entering a town called Gilsland and trying to figure out where our accommodation was. We had done 15km and were foot sore, when we were approached by a man in a woollen gap with a gappy smile. He gesticulated to the map and then to a house on the hill and told us a jolly story about something that happened that he had some involvement in… we smiled and nodded and i am sure looked a bit bewildered. So he told us another story, equally as hilarious, but about a different house…. with zero comprehension we excused ourselves and headed off in what we hoped was the right direction. He accompanied us to a point, delightedly sharing anecdotes about this place and that, none of which we understood, before saying something about something and ambling off somewhere! We were lucky again, on the right road and off towards our accommodation for the night! 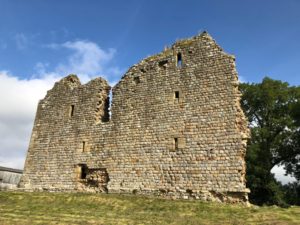 Thirlwall Castle, built by a family in the 1400’s out of Hadrian’s Wall stones

Our accommodation was an interesting building that had many stories about it, the latest of which was it was used as a convalescent home after WW2. It was sold off to become a hotel but that hasn’t gone very well. It is a shame because there is beautiful lush forest behind it with old 1900’s baths, sulphur springs and a gorge to explore. We did sleep the night but we didn’t spend any extra time in the place… our fellow travellers were all over 70. When the lift went off line it was a serious problem! One of the reception staff gave us a lift in to town where we settled down at the only pub open (which was actually very nice, serving locally sourced food, and giving us the bill with a real, old fashioned after dinner mint!). We spend a little while trying to figure out the logistics behind transporting our bags for our hike on Friday, because we weren’t staying at a hotel, we were getting a train to Edinburgh. It eventually went in the “too hard” basket, and we resigned ourselves to getting the train in to Carlisle instead. I was hopeful, but i couldn’t exactly walk with the blisters underneath my toes, so decided to learn how to “not finish” instead!

Unfortunately for Maddy, I woke up feeling heaps better in my feet and started poking her like an over-excited Tigger (from Winnie the Pooh) at about 6am the next morning! She placated me with a trip to the Sulphur springs instead, and there we finished our hiking!

So we are now in Edinburgh catching up with old friends, relatives, and in-laws! We have already climbed the Holyrood mountain… which was only 5km but with spectacular views! We will see you later this week! 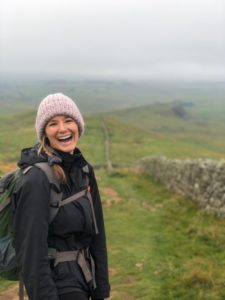 Things That Clare and Maddy Learned on Hadrian’s Wall