It was unbelievable that we were up to day 5 already! We had been away from our families for a full week, many of us with zero contact. The Golden Girls from the Cabin were refreshed after a day of mini-pedi’s and relaxation, and the rest of us were still pretty pumped about what we had experienced at Bald Rock.

It is fair to say we had no idea what was about to hit us. 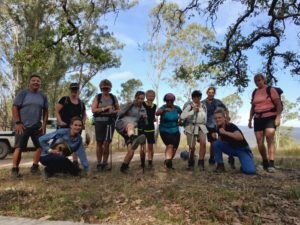 In our planning conversations, Laura had put Frasers Gully in the schedule alone, at 6km. I thought 6km would take us an hour, three hours at our slowest pace, so had requested a “Plan B” to pump up the kilometers a bit… after all, out most obstacley track to that point was a 5hr, 10km route through Mount Kuring-gai. Ultimately, i had deferred to Laura’s experience and was mighty glad i did! 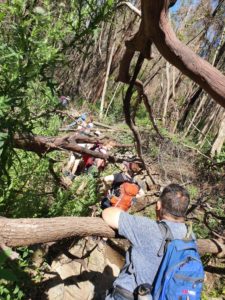 The day didn’t start great, with Sue having a mini-tanty at her bag catching on the chair. This was something that happened every morning, and every morning she repeated the ritual, until today where she got a little exasperated! She had un-done one tangle, then her hose would catch, she’d un-do that and her buckle would get tangled, and so on – enough to try the patience of a saint!

From there, our guides couldn’t find the rock stack where Steve had cut a path the day before, so we were macheting our way through long grass again! The team were mighty surprised to see a rope come out, and to half-abseil in to the gully, but all were game to give it a go! From here we meandered down a gully created by gold fossickers turning over the river bed, the entry to the former dairy farm, and through what remained of the circular pines (the rest of which had been cut down to turn in to matchsticks). We climbed over river jams, under river jams, down waterfalls, and along logs – far exceeding our agility training by far! However, every managed very well, and by 1130am, we were half-way through. 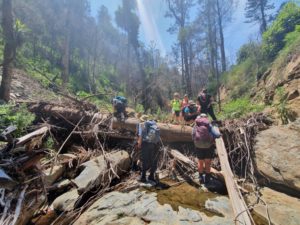 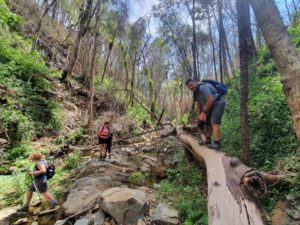 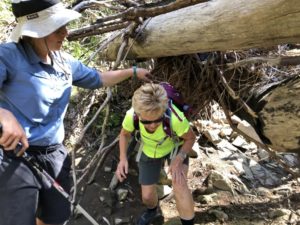 However, disaster struck. on a particularly large step-down, Mukta dislocated her knee. She has a huge pain threshold, but it brought her down pretty hard. We rested it and while we were having an early lunch, discussed the best way to evacuate her. Ultimately, it was decided that she had to walk out, the roads were too far and the brush too dense, for us to climb out with her. It was slow going, even with it strapped, and when she dislocated it a second time, she was overwhelmed. So we bandaged it and kept going, and it came out a 3rd time. White and nauseous with pain, it was about now that i remembered that i had a knee brace (oops), and we strapped it around what she already had on. She looked at me with relief etched over her face – it was holding in. It worked for the next 7 hours as we slowly and painfully inched our way along the next 3km. Ultimately, it took Mukta a full 8hrs to complete the next 3km, including abseiling the odd waterfall, balancing along fallen trees, crawling under log-jams, and using two solid sticks to balance along the river bed down stream. The whole day was 12hrs, with 10hrs on our feet negotiating the obstacles, and we made it to the troupie just before darkness. Steve drove us back along a bumpy 4WD track in the dark, and we were relieved to eat a late dinner! 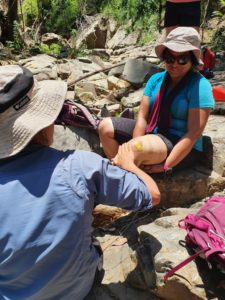 In the group ahead of Mukta and her support crew (big thanks to Dave, Sue, and Sandra for keeping the morale up and helping lift Mukta and her things through the course), was Louise, Terry, Robbie, and Debbie. These guys had their fair share of challenges too. Louise in particular has some problems with her eyesight, and was shaking with fear as she edged along a particularly steep waterfall. She couldn’t see where to put her feet. To her credit, she managed to listen to the guides, and found her way down, crying with relief. She experienced some anxiety towards the end of the day because she was worried about walking in the dark, which is why the JOIN crew split us up.

For me, this is courage personified. It’s one thing to clamber along a 3M high rock ledge when you’re strong, confident, and unafraid. It’s a whole other kettle of fish to do the same activity with a fear of heights or disability. Kudos to every single one of our team who overcame crippling fear, self doubt, and uncertainty to complete these obstacles! 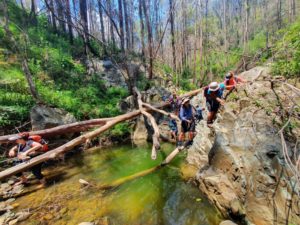 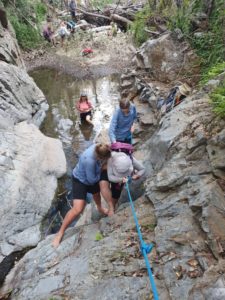 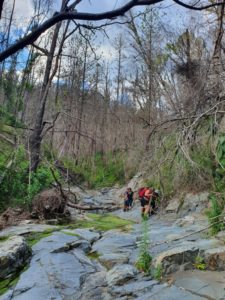 Terry had a different set of fears; feeling the walls of the gully closing in on her, she spent the day fighting feelings of claustrophobia and being unable to escape. Fear, uncertainty, and anxiety is mentally and emotionally exhausting, and it was no surprise that morale was low in this group at the end of the day. At our late dinner, every one of them had already decided that they weren’t going to walk on Day 6… But you’ll have to read tomorrow’s blog to learn whether or not they did!

The highlight of today was being introduced to the Kitchen’s mouse-trap… a beautiful python that kept us company, as still as a plastic toy hanging from the rafters, while dinner was cooked. We even saw it catch a mouse! 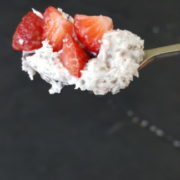 Why I Don't Participate in Halloween 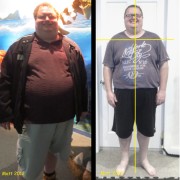 Matt Did Not Realise the Transformation He Had Achieved! 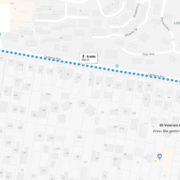 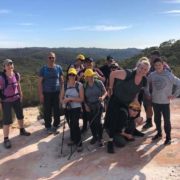 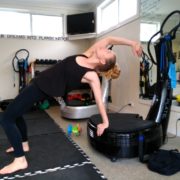 What Message are we Inadvertently Endorsing by Accepting Weight Loss as a "Goal"? 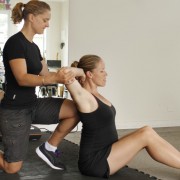 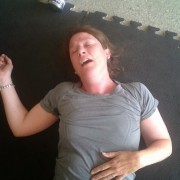