Most of you reading this would already know that we were supposed to be trekking in Western Australia this November, but unfortunately due to the borders remaining closed, we had to reschedule to next year. Instead, we were referred to a fantastic company called Journey Outdoors in Nature (JOIN), who put together a 9-day itinerary for us, including local, organic-where-possible food, guides, and accommodation. Since what we were looking for is a bit unusual in the adventure travel arena, Laura and Clare had many phone calls to design the best possible trip for the IntoYou Hiking Group… and even then, Clare wasn’t totally sure what she was leading the group in to! 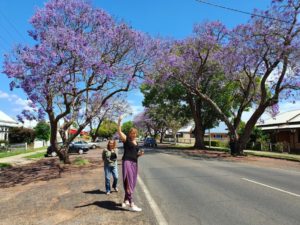 Visiting the Jacarandas as we went through Grafton… we got there eventually! 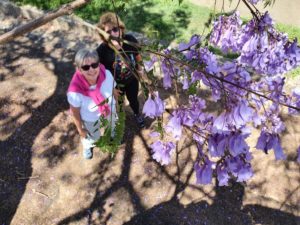 We threw certainty to the wind, and climbed in to the cars on Friday morning to begin a 2-day drive to the Clarence River Wilderness Lodge (CRWL). We made it to Coffs okay, but had a minor 60km detour on Saturday when Clare missed the turn off to Grafton! From there, CRWL directions warned us not to follow a GPS, as it has led previous travellers hours out of their way, so it was with some trepidation that we made the final 20km along dirt roads and away from all forms of connectivity. We made it without any trouble, and negotiated the roads fairly easily. 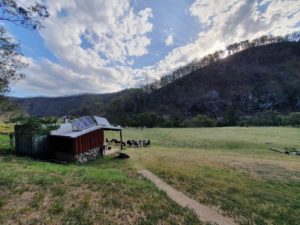 Home for 9 days, we enjoyed watching the light and colours change over that mountain. We also had the place to ourselves for much of the time! 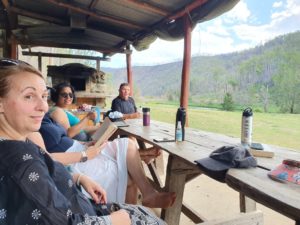 Where we spent every afternoon – the camp kitchen!

Boy, what at first impression! We rounded a corner at the base of a hill and viewed the most beautiful house, which was also the camping office! Sharon showed us to our rooms, 4 little tree huts wedged in to the side of the mountains, and one cabin. We immediately changed in to swimmers and dove in to the beautiful Clarence river! A few of us were escorted out with a little bump from a cod fish… although we didn’t realise it at the time! 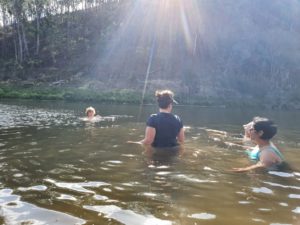 Straight in to the river. The only time some of us swam in our swimmers, the rest of the trip we swam fully clothed! 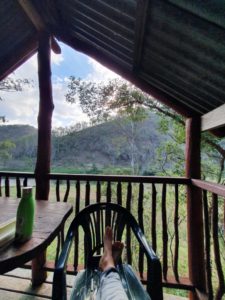 Where many of us spent a quiet hour every morning, on our tree hut veranda. Clare and Sandy had a nice morning ritual which included a coffee and quiet “moment” listening to the birds.

About 630pm we met Laura from JOIN and her team, Ingrid (who would be hiking with us), and Gemma (who did our cooking and shuttle car driving). We had our first delicious meal of many! Laura explained to us then that she doesn’t do solid plans, but likes to modify and adapt as she gets to know the group – something that would be amazing later on in our trip. For now, it was nice to meet our leader and we were excited about what she had in store for us. We also met Steve at dinner, Sharon’s husband and owner of CRWL. He told us many stories over the coming week, and even came to rescue us one day! His knowledge of the land and it’s history made our hikes even more enjoyable. 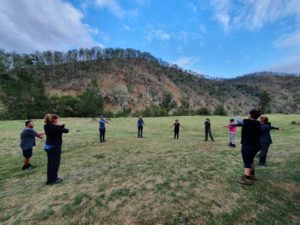 Day 1 opened with the roar of the generator that Dave brought to power his expresso machine! He taught us all how to use it, but Terry never quite managed to learn, sweetly finding someone to make it for her each morning! We met Ingrid and Laura at 730am, and hiked from Fish Head Flat (where our accommodation was) towards Nugget Flat, and up a spur to Sunset Lookout – which was randomly plagued by cherry tomato plants!! After lunch at Sunset (which quickly became one of our favourite places for food), we travelled down a crumbly fire trail, most of us fell or slid more than once, to the “Rose” Garden. Most of us expected roses, but it is named after the woman Rose who lived in the hut – the remains of which we got to see! From there we literally cut our own path back to camp – alternating fear of snakes with fear of wild pigs as we passed rutted out pieces of ground! 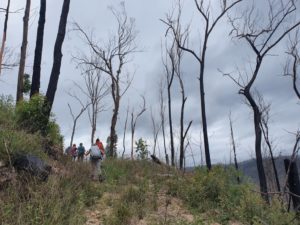 The property has been devastated by bushfires, which in a way was positive because we could see the river from the ridge top, and we didn’t see many snakes! 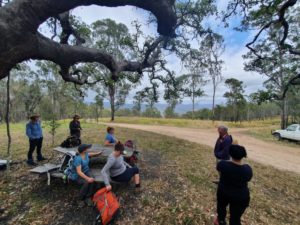 The first of many stops at Sunset Lookout 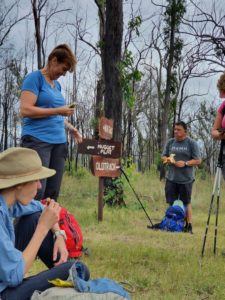 Our leaders had us do an exercise that night, asking us what our “rose” of the day was, and also our “thorn”. For most of us it was the fear of falling that stuck in our side, and roses included Dave’s newfound confidence in his body, Terry seeing butterflies in the bush, and Mukta seeing the re-growth after the bushfires. It was still quite barren, but it was nice to see the recovery process happening. Many of the views we saw would have been impossible with full-growth, and that was a rose in itself for many of us!! 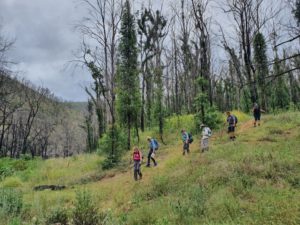 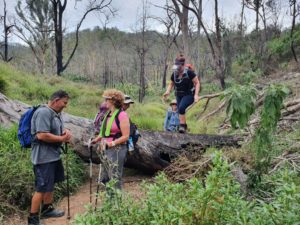 Day 2 – Today we hiked across the campground towards the mountain that we look at all evening while we were in camp. Once again, it was a steep climb, but the views were next-level spectacular at the top! We stopped in the early morning sunshine and had a 5min mediation overlooking the camp. Everyone managed to quiet their minds, Dave was so befuddled when we finished that he couldn’t find his backpack… it was still on his back! 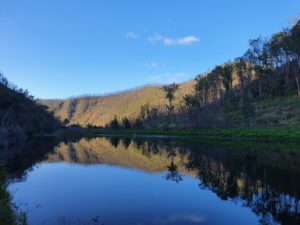 Early mornings on the Clarence River 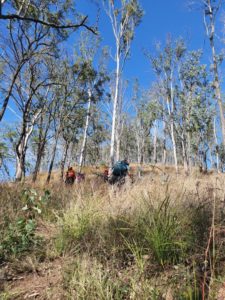 Cutting our own path up a steep spur

As we made our way across the ridge, Ingrid was concerned about the lack of animal poo. So many of the animals didn’t survive the fires, and it will take years for them to repopulate. According to one of the property owners that we met later that week, there are a few factors in this. One is the increasing temperatures and intensity of the fires, but the other is that we have changed the landscape so much. There are no longer refuges for the animals to run to in the crevices of the mountains that used to be wet and rainforested. Instead, we have turned them over; in the Clarence Valley region they were looking for gold and selling the trees to make matchsticks, but the wet areas have been destroyed in other regions for other reasons. The animals that do survive have fewer mating options and the cycle continues downwards. Thankfully Steve and Sharon and the local indigenous population are committed to doing all they can, another reason to visit the lodge if you get an opportunity! 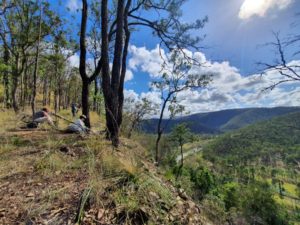 Meditation on the ridgeline 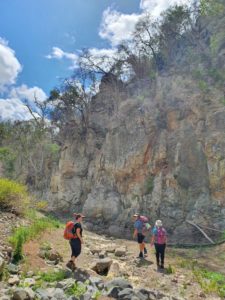 We saw our first snake on the way down the back of the ridge, but it just slithered off harmlessly. Laura cautiously headed past where she saw it, and the others were none-the-wiser. The grass in some places was neck-high, so we are lucky in many respects that we didn’t see one every minute! 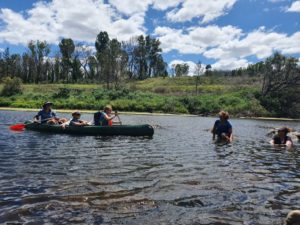 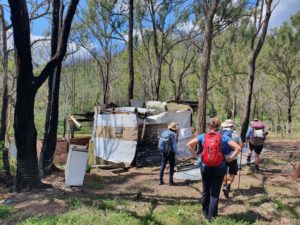 After lunch on Eaglehawk flat (unfortunately we didn’t see any eagles, but we did see hawks and Kites on other occasions), we had a canoe ride across the river. We had a swim, then said goodbye to Deb and Louise who decided to head back with Gemma. We couldn’t find the abandoned mine shaft, but we did walk past a house that was obliterated by the bushfire, and has been abandoned. We made several river crossings, and our guides were warrior’s cutting the path for us with a machete! We were on our way up a mountainside, attempting to by-pass a large forest of wild tobacco (we had discovered by now that I was allergic to these, coming out in a rash, sneezing, and clogging up my sinuses to a painful degree), when Steve came over the radio to clarify our route. Laura innocently said we were taking a short cut, heading past a house to get on to their driveway, which would lead us to the road where he was waiting to pick us up… Now, Steve was a pretty relaxed guy, and in his relaxed drawl he replied “Don’t go near that house. That guy has dingo’s”. In a slightly more urgent tone he followed it up with “AND THEY WILL ATTACK”.

By now, the house was in sight, only a few hundred meters up the track. I remember mouthing “Oh MY GOD” to the rest of the team and getting an overwhelming urge to giggle. To Laura i said “define ‘Near’ “… since according to my definition, we were already there! We backtracked pretty quick smart and i sucked up the sneezing! We made it to the other side of the river, then along the public road to where Steve was waiting besides some WW2 tank traps. 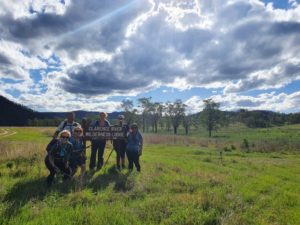 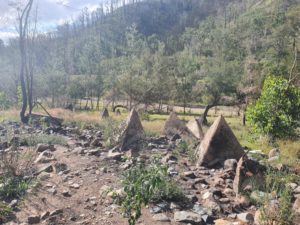 Huge Kudos went to Robbie on day 2. Our oldest member was sprightly and finished 15-odd kilomentres without complaint, the only evidence of her fatigue was falling asleep in the troupie on the way home! They weren’t ordinary kilometres either, were were constantly climbing over and under things, evading dingoes, and crossing rivers – she was amazing! 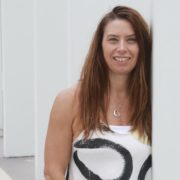 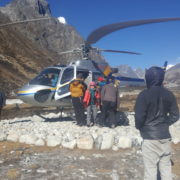 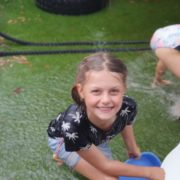 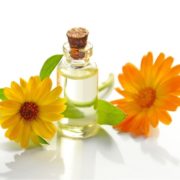 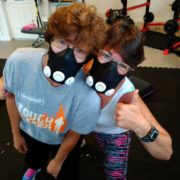 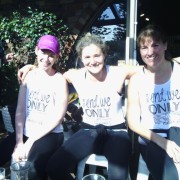 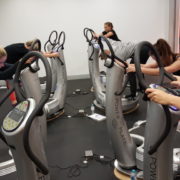 IntoMum are up for a bit of cardio
0 replies

Buy This for Christmas!