Well,we are mostly all here! Poor old Katherine is not.. she was stuck in Tamworth with a 2hr delay, and missed her flight! Clare turned up with a head cold, but apart from that we thought the worst was behind us. We were late taking off from the airport, and we arrived in China with just 30minutes to get to our connecting flight! thankfully they waited for us, and we took off only about half an hour behind schedule. Jen remarked that we now know that Babs has a “3rd gear, her get on a flight pace”!!

We made our way through the chaos of Kathmandu airport, at 3am Sydney time, only to discover two of our group’s bags had not made the flight. Di and Carol have strict instructions to pick up “2 bags and a human” today, as hopefully Katherine and their bags will be coming in on the same flight! As you can imagine, the drama took up a fair few hours, and we fell in to bed at 6am Sydney time. We weren’t the only uncomfortable ones, Gretchen sat next to a super-lanky man, who’s knees were so far away from his hips that he had to sit side on to fit! Jen also had an interesting experience, sitting next to a man who slurped his Cabonara from the side of his bowl, shoveling with his fork.

With any luck our drama is done down! Unlikely but we are all in good health and excited to see the city today! Gretchen, Terry, and I made our way to the roof of the hotel, so look forward to some good photos!
x Clare 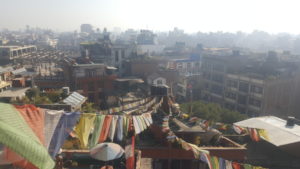 Survived the Flight to Lukla