Blog
You are here: Home / Blog / News / Client of the Quarter: Kelley, Tony, Larissa, and Debs!

Firstly, we have to congratulate our very first Client of the Quarter winner, Kathy! Since we nominated her, Kathy has gone on to enroll in Surfing Group and it’s hard to see that anything will stop her now! She has won a free session from each of us, worth $232 all together! 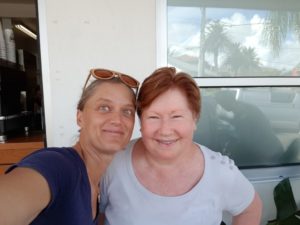 During April & May you’ll be voting on one of the four worthy nominees below. To Vote, simply join our Client of the Quarter facebook group, then participate in the latest poll, which is pinned to the top of the page, and also marked as an announcement! It is that easy! 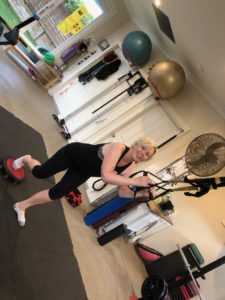 Kelley started training with us in July 2017. Initially Kelley seemed a apprehensive to try somewhere new and suffered with major negative body image.
She wouldn’t allow photos of her face and was generally self-deprecating to an extreme degree! We began training once a week which quickly turned into twice, once with Charlie and another with Jade. Over the time Kelley has training with us she has been consistent and dedicated even under extreme work stress and pain. Kelley has come on leaps and bounds since she joined, with her eating, fitness, reduction in hip pain she came with and she is having fun and able to laugh at herself more.

She gives anything we give her ago and has been a pleasure to train. Kelley has been nominated because she always tries, even when her mind tells her she shouldn’t or can’t. For Kelley, it’s been a constant mental battle, and now that she seems to be on the other side, we can look at her journey and enjoy how far she’s come! 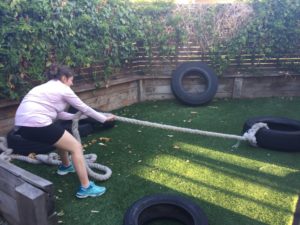 Larissa is one of our IntoGIRLS and has been training for three years now. Lately, she is usually the first person to arrive to each and every session! Maddy hadn’t trained Larissa for months, until recently when she took over Thursday nights.

She said “I haven’t trained her for a while, and was really surprised when i saw her, and not just because she had lost a significant amount of weight. She’s listening, she’s trying hard, and she’s training better“.

When Larissa started with us, she was shy, awkward, and didn’t really understand what she was doing. A change overcame her in 2018, and she started walking in with a proud chest, sometimes running in! And now she really values her sessions. The key to confidence with the IntoGIRLS is in the definition of a “good” workout. If they work hard, if they feel exercised, if they did a little better, it’s all considered a job well done! We don’t care how many goals she kicked or what the score is! Larissa is committed to 2x weekly, and hardly misses a session. She cooperates with what the trainer is asking her to do, and learning to understand her body better. Even more recently, we have been setting goals to get stronger and fitter, and because her confidence has improved, she can see herself achieving them!

Larissa has been nominated because of her confidence transformation. We have thoroughly enjoyed watching her bloom, and will look forward to seeing her THRIVE! 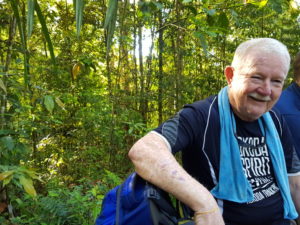 Tony joined us with hiking group because he was going away with his daughter to do Kokokda. Unfortunately he was helicoptered out on the second day with an unknown health problem, you can read that story here.  It was discovered once he got to hospital that he had gotten so fit before the trip that his blood pressure medication dose was incorrect!!

Once he was given the all clear and his meds were back in balance, he started training again, only to rupture his achilles on the week before hiking group started again! He had surgery, then worked his way back in to his sessions again. He’s come back to training with his wife and daughter in tow, and the three of them absolutely give it what they’ve got – every single session! Then another setback, he needed a pacemaker… so off he went for another surgery, endured another recovery, and was back on his feet again and in the gym late last year! Tony was known as Torch in his heyday (still is in some circles) because of his bright red hair. He was heavily involved in a local Surf Club, and their attitudes to training have survived in him to this day. I challenge you to say this about another person: he LOVES the assault bike and always gives 100% (literally)! With his health issues that has been a little scary for us! However we always make time to work with his doctors and ensure we are doing the best for him with his program… then we let him off the leash!

Tony has been nominated because he never gave up. Not after all those set backs, not when he’s in pain, not when things are hard; he faces everything head on, with a smile, and a “do what you can” attitude. We are very proud to be his trainers. 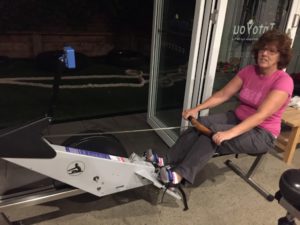 Deb is the only client who is still paying the going rate from 2007… literally it’s almost a 20% discount on every, single session! Deb has been training with us for 12 years, and has never changed her ongoing membership, which means it keeps ticking over at the same 2007 rate! Deb turned up one day at our old studio in Brookvale saying saying that she’s only doing a 10 pack, that she doesn’t run,  and that she doesn’t get out of bed before 10am… 12 years, 3 overseas adventures, 3 tough mudders, a couple of 5am hiking group weekends, at least 3 run clubs, and one surfing group later we are still stuck with her! And loving every minute!

Deb’s first overseas adventure with us was Hiking the Inca Trail in Peru, which you can read about here. We chose to support Diabetes Research Australia for this trip because Deb had developed late onset Type 1 Diabetes, THAT terrifying experience you can read here. On that trip, Deb really blossomed. She had an absolutely brutal 3rd day climbing up Dead Woman’s Pass in the rain, completely out of her wits with fear and self-doubt. I nicknamed her “Quasimoto” that day, because the backpack under her rain poncho made her look like the character from the fairy tale!

Significantly, from that date since, nothing has stopped her. He attitude has changed from “can’t do this” to “i’ll give it a go” and she has really shown us what is possible for a Grandma of 2! Since then Deb hiked with us in 40+ degrees in Cambodia, and was one of the evacuees in our eventful trip to Nepal in 2017. She’s fun, positive, encouraging, and always shows up.

Deb is nominated for her tenacity, her friendliness, her consistency, and also for the mental metamorphosis that she has undergone! She brings so much positive energy to our studio, and always leads by example!

It’s a tough field this year! Please take the time to vote here, and reward these amazing humans with a free session from each of us at IntoYou!

Why We Believe the Mother is More Important Than Her Baby