When we left to our respective rooms on day 5, the mood was negative. Rather than feeling accomplished that we’d made it out and overcome a huge challenge, the prevailing mood was that it was too hard, we couldn’t do it, and we should give up now. I hoped that a good night’s sleep would repair our teams exhausted and battered ego’s, but when we arrived at the camp kitchen on Friday,  day 6 of our adventure, only 4 of us turned up. Mukta couldn’t walk, but she and Terry came down to see us off. 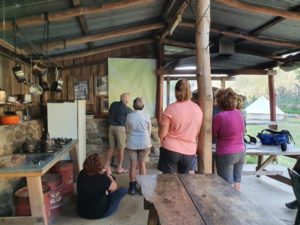 Going over the new plan. Check out the flood levels on the pole on the right!

Terry was quite open about what she was feeling, and between Sue and Sandra, managed to be talked in to getting dressed “just to see” what Laura and her crew had planned for us. Laura obviously had the same thoughts about the group morale, because when they met with us, they announced that we wouldn’t be hiking today. They had been to the cabin already, got the Golden Girls out of bed, and come up with a different plan. 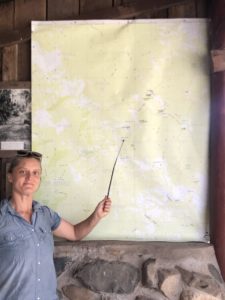 The map in the camp kitchen where we planned our hikes

I remember feeling a distinct sense of disappointment that we weren’t hiking. This was my first gym trip in 3 years – the last one was in Nepal when i was helicoptered off the mountain with bronchitis, tonsillitis, and laryngitis, and was later diagnosed with internal bleeding from a tumor that had out grown it’s blood supply, resulting in anemia and a severe low red blood cell count. In the interim, i had had a nervous breakdown, ruptured my L4L5 disc in my back so bad i was admitted to hospital, and had taken 2 weeks to stand, longer to walk, again. In other words… i really needed and wanted to “finish” this trip. For me, finishing was confirmation that i was healthy again. All that went through my mind in a split second, and in the second half of that second i reminded myself that this wasn’t about me! This was about our team. So i settled in to give everything that Laura threw at us a go. 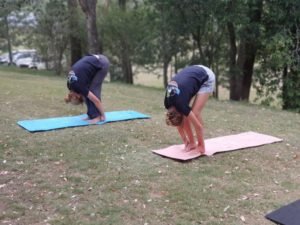 The girls stood and led yoga in the rain, while were were under a shelter 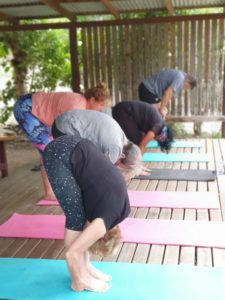 Our Golden Girls arrived about then, and Laura explained the plan. We were to start the day with Yoga! It has started drizzling, so we did Yoga on a large wooden platform to the tune of the rain on a corrugated iron roof. It was magic.

We then had an ice-bath & epsom salt recovery session. I was sitting in the rain in a bucket with feet so cold they almost cramped, and i was happy. I cannot explain it. We did a minute in the freezing bucket, a minute in a warm epsom salt bath, and a minute in another cold bucket (or more, they soon stopped keeping time!). I had this overwhelming sense of adventure, exhilaration at trying something new, and peace at being in nature and experiencing new things. It was challenging, fun, glorious, and the perfect thing for a rainy morning! It was a clever idea, because even Mukta could do the yoga and ice bath with her knee! Dave was hilarious – while we were swearing like troupers as we dipped ourselves in, he was crying out “sugar”, “ooo honey” instead! 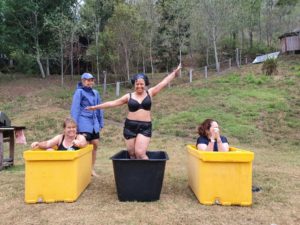 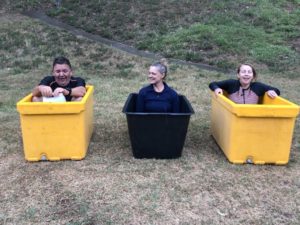 While we waited for lunch we did a quiz in teams on the trivia that Steve had taught us so far. We didn’t do great, but the Golden Girls did the least worst and won themselves a 500 point head start in the adventure race Laura, Ingrid, and Gemma had designed for the afternoon.

After lunch the sun came out – as if on cue – and we received our radios and instructions, Mukta was running base camp from the camp kitchen. Each task in the race had points assigned to it, with the most points going to the most strenuous activities, and the least points going to the easiest ones. We had 3hrs to complete as many as possible, including standing in the COD nest and recording ourselves getting bumped. The easy ones you could hit again and again and again. I was in a team christened the “Atchoos” due to my whole-body sneezing that echo’s off the mountains across the valley. With a 500 point head start, and in a team with Terry, Sue, and Dave, it quickly became apparent that we were hiking 4km up 400 metres to Sunset Lookout for the 3000 points, doing the little-point tasks along the way *like taking photos of tree textures, selfies with spiders or snakes – safely of course – and coming up with a team song. Dave, Sue, and I took turns in helping Terry up the hills. She could walk faster if she leaned on us and let us push her. Teamwork! 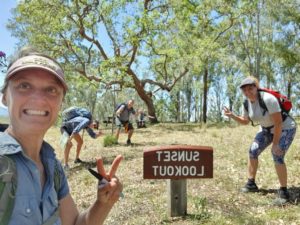 While we were trekking up the mountain, Mukta was checking in with each team over radio. She also had little riddles for us to solve. However she stopped quite abruptly mid-way through the race. We later found out that she had gone to her room to rest, because while she was in the camp kitchen, she was visited by no less than FIVE goanna’s! Thoroughly freaked out, she took herself to her room, intending on taking pain killers and having a nap. She was getting ready when she heard footsteps coming up the pathway, followed by a knock on the door. She thought it was Gemma, coming to check on her and opened the door to what she described as “a mother T-Rex of a Goanna”!! She shrieked and flapped her arms, and chased him away down the path. Later on, she was reading on her veranda, when she heard a rumble in the women’s showers. Thinking that the goanna came back, she started yelling and flapping her arms at the building, about 3 metres away from where she was sitting. Embarrassingly, it wasn’t a goanna that emerged, but one of the campers, wrapped in a pink fluffy towel and looking thoroughly alarmed. Mukta had no explanation for her… she said “hello” and sheepishly retired to her room again… 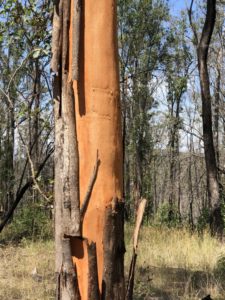 One of the “tree texture” photos that earned us 50 points a photo.

Meanwhile, our Golden Girls were having a lovely time. They had done a 180 degree turn, and instead of not showing up, and not only showed up but were participating 100% in their tasks! They chose a 4km flat hike up a river bed, to where the Tooloom and Clarence river meet. They dipped their towels in puddles, got a selfie with a dead baby snake, found fruit in the Orchard Campsite, cackled like a kookaburra in the Kookaburra campsite, and took a canoe to the other side of the Clarence river and back! Legends! 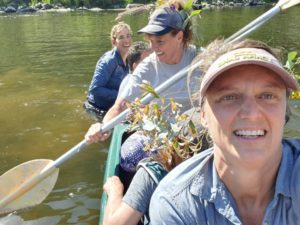 We have to say – what an amazing turn around in morale and participation. What a fabulous idea from Laura to keep everyone engaged! We’ve said it a million times, and i’ll say it again, JOIN is a brilliant company to choose for an outdoor adventure. Special kudos go to Terry on this day, who had the clarity to see she was saying “no” before she knew what was planned for the day, and decided to take each moment as it came. She ended up doing the hardest tasks and winning the race!! She had also missed out on a rest day, so was thoroughly deserving of one if that is what she chose, but instead decided to participate, despite her reservations, what a trouper!

The only other news of the day comes later in the afternoon, when everyone went to shower and re-group before dinner. I was helping Laura drop the camp kitchen’s shade, as it had climbed over 30 degrees. We unearthed a frog who had made it their home, and I was determined to “save” it by returning it to the river (despite Laura explaining that it was quite capable to getting their itself!). I had no sooner stepped out of the kitchen, on to a patch of native mint, when i was stung by a bee and had to come back! While Laura was removing the sting, the frog sat happily in my hands. After taking several photos, Sandra was the one to rescue it back to the river… this time with shoes on. 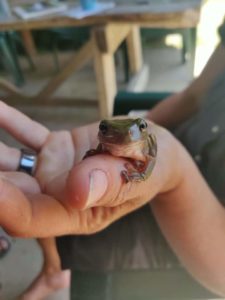 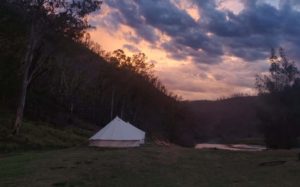 We were treated with a sunset today! 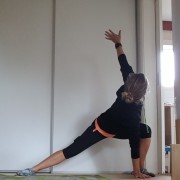 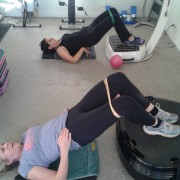 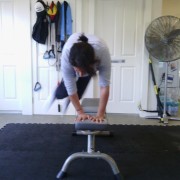 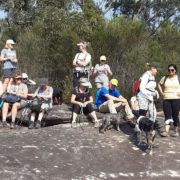 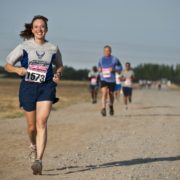 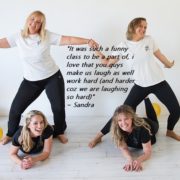 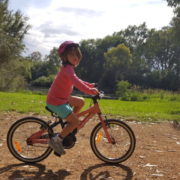